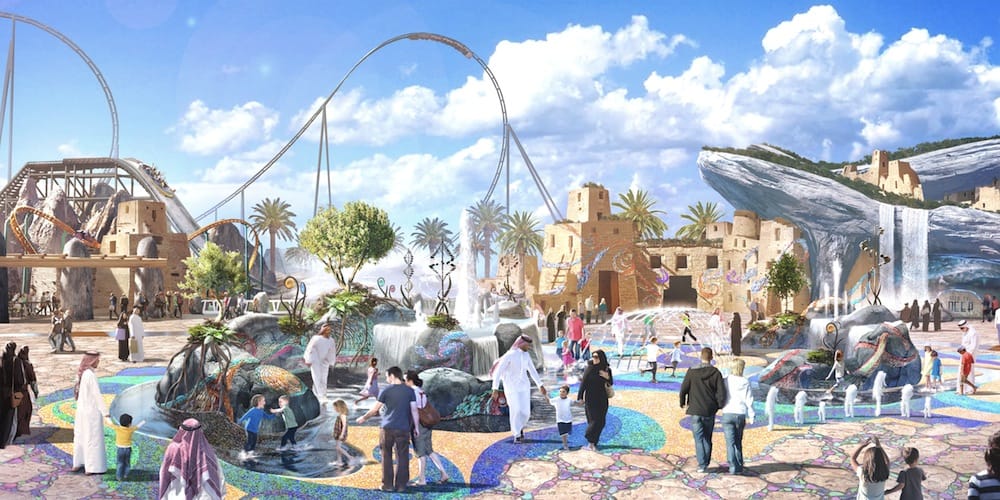 From a recent survey it has been determined that theme parks in Saudi Arabia are the number one activity that Saudis would like to see, ranking above cinemas, water parks and other entertainment options.

In 2016 project Qiddiya was revealed. This project is a combination of five primary projects. Included in these projects are resorts, parks and a city centre. Phase one, which is set to open in 2023 will feature the hotly anticipated “Six Flags Qiddiya” which will be a huge theme park in Saudi Arabia. Something that has never before been seen in the Kingdom.

Bigger than Walt Disney World, the area will be split onto five separate zones with Six Flags Qiddiya found in the Resort Core. The remaining zones are: City Centre, Motion Zone, Eco Zone and Golf Community.

Not only will phase one include Six Flags Qiddiya, furthermore, but it will also include a water-themed park filled with rides, shows, attractions, sporting elements and a fully integrated resort hotel.

The park will be built to accommodate 10-15,000 visitors per day. Throughout summer months the park will be open late to allow guests to avoid the heat. Furthermore, there will be cooling technology and features around the park to keep guest cool. These include Shading, landscaping and water misters.

KSA is continuing to open up their country and relax strict rules in line with vision 2030. Visions 2030 was first announced by Crown Prince Mohammed bin Salman and his intention is to reduce Saudi Arabia’s dependency on the oil industry. Creating more diverse and varied revenue streams for the country.

The Qiddiya project is one of the key focal points to Saudi Arabia’s Vision 2030, with the aim to increase tourism revenue to 10% of GDP. . According to QIC, the destination will “unlock tremendous opportunity, enabling economic diversification, while enhancing the quality of life for Saudi citizens.”